You are here: Home / About

Ausguard Pest Control is an Australian owned and family operated business servicing the greater Sydney region, offering 24-hour termite support. From small to large infestations, we ensure pest-free homes and businesses to provide you with ultimate peace of mind. This involves removing all pests from both residential and commercial areas including cockroaches, termites, spiders, rats, ants, birds, mice, bed bugs, mosquitos, fleas and many other bugs. There’s also no need to worry about your children or pets because we use products that are safe and effective. Ausguard Pest Control won’t rest until we’ve exterminated all pests and termites from your property. All personnel work by the guarantee that you’ll receive quality and reliable service that sees all your pests eradicated. Our team consists of the highest trained termite technicians who have a minimum of 10 years of experience in the field. You can guarantee punctuality from us, however, if one of our technicians happens to be running late you’ll be notified immediately. Ausguard Pest Control is completely safe for children and pets, with tailored solutions for your home or business.

Bear Cottage is the only children’s hospice in NSW – a very special place that’s dedicated to caring for children with life-limiting conditions. Ausguard Pest Control is very proud to donate a portion of every job we do to this incredible organisation.

Mathew Mason was born on 25 Sept 1955 and his father Eric Mason had his own real estate business in Castle Hill (Mason Reality) and Mathew worked for his father but hated real estate and spent most of his 20s trying to figure out what other career path to do. During this time as a real estate agent one thing that did stand out to Mathew was in the sale process a termite/pest inspection was required for the sale of a home, the number of times they received calls from the new vendor a couple of months after they purchased the home they would complain that they found termites in-home and Mathew and his father (Eric) always complained how they would have a property inspector for only a period of 3 to 6 months and all of sudden they disappear, they would try to contact company top discover yet another one has closed down! 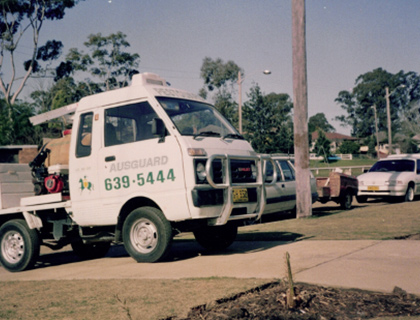 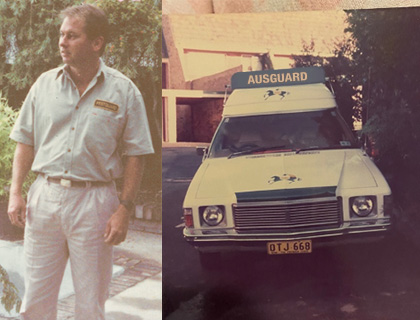 In 1980 Mathew then contacted his uncle George Mason who was a pest controller and owned Allison Pest Control. Mathew asked him why do these termite and pest inspectors close down after 6 months never find the problems. His uncle explained to Mathew that termite/pest and building inspections are done by companies that only do a property inspection, they don’t do anything other than cover themselves on paperwork stating that all these areas were not inspected due to some silly reasons, along the lines of limited access etc.

Mathew then asked his uncle questions about the pest control industry and his uncle said if you after a career change why don’t you come out to work with me for a week and see if you like it, so Mathew did and loved it. The work was completely different to what he was used to, so he quit with his dad and started working with his uncle and enrolled himself into the Tafe at Wetherill Park and studied the (PMT Course)  Pest Management Technician course that went for only 12 months, Mathew worked with his uncle for 2 years for the required training. After Mathew completed his course in 1981 and worked a further 12 months with his uncle in 1982 he then brought a panel van and registered a business name that he was not that fond of, a bug pest control.

Mathew started doing all the inspections for his father’s real estate business, one day Mathew and Eric were talking about Mathews career change and how it was all going. During the conversation, Mathew said he was unsure of the business name and didn’t like it, his father in response told Mathew that he didn’t like the name at all! and he needed a name with the word pest in it! Mathew took that on board he thought long and hard about this over the following months and came up with the name Pestguard and Ausguard Pest Control! Mathew went back to his dad and said he thought of a name and Eric turned around a said no don’t change the name you have been trading for a while now and you shouldn’t change the name, Mathew said dad what about the name Perstguard and Ausguard Pest Control and his father went silent for a few moments and said Mat you need to go register that name right now so he did that afternoon.

The name Ausguard Pest Control was born, Ausguard pest control was an instant success and the business just kept growing and growing. In 1992, Mathews parents were killed in a car accident. The death of Mathews parents took a massive toll on Mathews drive with his personal and work life.

During this period Mathew hired a husband and wife to manage the company for him. Ausguard for him, was the last thing he cared about during his unexpected early retirement, until 1996 when Mathew discovered that the managers he hired were stealing from him and were running the business into the ground. The pair ended up on fraud charges.
Mathew started working again. and once again success grew and grew rapidly. Most of the Ausguard clientele returned to us as they learnt that Mathew was back running the business. He proved himself on providing a service that is second to none.

Mathew retired in 2014 and passed the business down to his children. Our clientele keeps growing every day with our 100% customer satisfaction guarantee or double your money back.

Ausguard Pest Control has been servicing the Sydney, Blue Mountains, Central Coast and Hunter Region ever since and has serviced over 152,100 clients Sydney wide.

Our services are beyond any other company in Australia. We strive on being the best in the industry and will continue to provide the ultimate termite and pest control protection for your home guaranteed.